After meeting my first goal of one hundred followers on Twitter (What!?) and my second goal of two hundred and fifty (WHAT!?!?), I thought I’d celebrate with a Q&A post here on the blog.

Before I get started, I just want to extend a HUGE thank you to everyone who has followed me on Twitter, liked my Facebook page, and read my posts. I’m still getting my feet in the blogging world and seeing this response has been nothing but encouraging. ❤

That said, let’s get to it!

“Avril! Love your post on using lists to enhance scenes! If you haven’t answered already, how do you develop plotlines?”

There are a couple of ways I’ll start developing plotlines but, cliche as it sounds, they all start with an idea.

Sometimes, it may be a topic I’m interested in researching.

Bound to the Heart originated as one of the components of a research project as part of a travel course my last semester of college. I knew early on I wanted to focus on bookbinding, which later expanded to include Gutenberg’s printing press. The project itself consisted of writing a novel that I printed and bound, resulting in the final product below.

It’s by no means perfect, but not bad all things considered (binding using upholstery vinyl is incredibly difficult but the closest material I could find to faux leather).

While Bound to the Heart was prompted by part of a class, finding a topic I want to explore is often a starting point. Against His Vows is centered around agriculture and farming, and I have plans for another novel about a character who was part of a press gang during the Revolutionary War/American War of Independence.

The latter was actually sparked by a brief scene in an episode of the children’s cartoon Liberty’s Kids, which was my favorite show as growing up. James is almost taken into a press gang which, if you’re unfamiliar, is a group of men being forced into the British Navy at the time. From what I’ve read on the subject thus far, it seems that a man could be pulled off the street without much noticed and forced to enlist. It sounds very much like the drafting system in the states, where guys still have to register when they turn eighteen even though it hasn’t been enacted since the 1970s. To be clear, I’m still in the preliminary research phase so my facts may not be 100% accurate at the time of writing this post.

It may also be that I’ve created a secondary character who I’ve grown to love or has a part of their story arc that needs to be continued but cannot be given proper attention in the project in which they first appear.

For instance, the younger brother of Bound to the Heart’s protagonist will be showing up again in his own novel, as will their sister who at this point has not been seen but referenced several times.

I’m currently writing the first draft of Against His Vows, in which the protagonist leaves his bride at the altar to elope with another woman and revolves around the consequences that come with going against his father’s wishes. I’m already planning to do a story revolving around his ex-fiancee, possibly with her staying with an aunt in the country to regroup and recover from the event.

Two words I find to be of use in creating plotlines are What If?

What if two people in a fake marriage started falling for each other?

What if a young child was convinced his stepfather was a vampire?

What if a thief tried to return what he stole, but without letting himself be caught as the one who took it in the first place?

Asking yourself the question tasks you with finding the answer, and it starts to branch out from there. How would that character get to a point where that would be a problem? What would the consequences be of a failed attempt to solve it? Where would they go from there? This is how Guises to Keep came about, with the question being one of morality and if certain actions or conduct can sometimes be justified depending on the circumstances surrounding them.

It’s kind of like following breadcrumbs, one thing always leads to another.

Once I have the idea, that’s when the plotting starts.

I’m what writers call a Plantser, or a combination of Plotter and Pantser. I’ll go into any writing project with a minimalistic outline.

Here’s a sample of the one for Bound to the Heart:

It’s very simplistic but just enough to keep myself on track in terms of storytelling so I don’t stray too much from the key points that absolutely must happen, like meeting the love interest. As I research, I also make note of any interesting points I come across, like interesting lines in a journal or piece of historical clothing would love to have one of my characters wear. These can later be the inspiration for new scenes of chapters.

From there, I like to say I let the story write itself. I might decide the character is a pianist and add that in. Halfway through there might be mention of three more older brothers that weren’t originally there. In my current project, I’ve added a scene where my protagonist gives back his love interest’s bracelet after it broke and he held onto it for safe keeping, after which I went back to the second or third chapter and added in a scene where the bracelet gets caught on the latch of a carriage door as they’re going to the theatre and snaps (and then added in that it was a gift from her late mother when she turned fifteen).

If it feels right, I’ll do it; it turns out to be wrong, it can always be fixed in editing.

This can also lend itself to new ideas. I might add something in and love it, but realize it doesn’t work for that particular story. In such a case, I’ll move the concept into a document I refer to as my Idea Dump Zone. It’s a complete and utter mess full of sentence fragments and random words, but also helpful because it acts as a reserve for when I need a little inspiration.

Everyone has their own way of developing their plots, and their method can depend on if they designate themselves as a Plotter or a Panster. Both have their advantages. I like to think each project decides how it develops, based on what the story needs.

Thank you for participating in my first Q&A post! I would love to do more of these a few times throughout the year depending on how things go so be sure to follow me on Twitter and Facebook to stay informed!

But, hey! You don’t need a Q&A-specific post to ask me writing questions. All you’ve got to do is Tweet me @AvrilMAalund and you might just see it as the topic of a post! 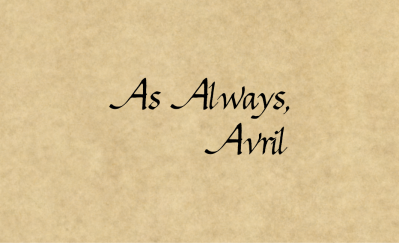